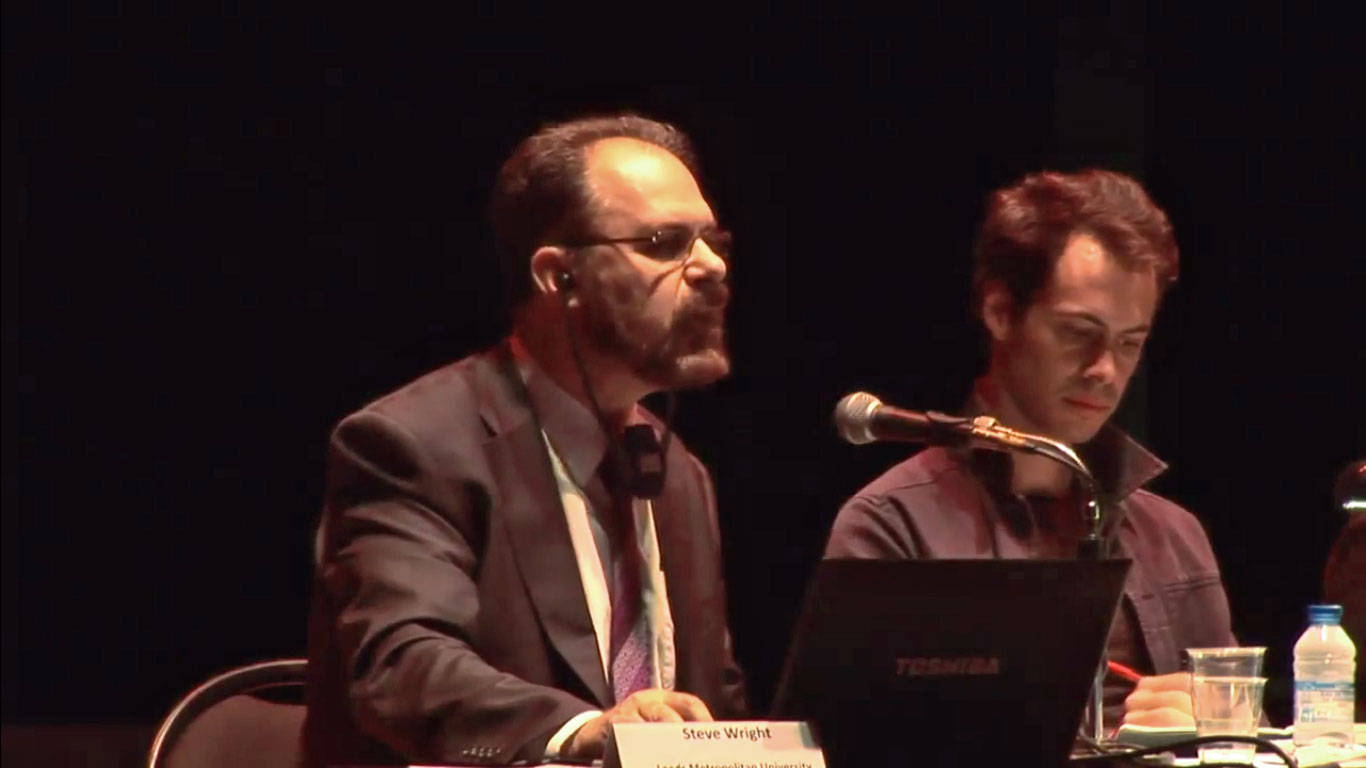 If we are to adequately anticipate and accurately judge the likely trajectory of future responses to climate change, a working assumption must be that the probabilities are that elite, state and corporate “solutions” over the next 50 years will be necessary, but not sufficient. For several nations this may mean the end; others will be faced with substantial internal migration and for others a mass exodus to foreign shores, as people struggle to find continuity. This presentation assumes that preparations to meet these challenges will be wholly inadequate. States will be panicked into emergency measures, including deep clamps on freedom of movement. Past analyses have treated such scenarios as environmental disasters but this presentation sees such scenarios as emergency planning options which have already been structured into state planning. What can we expect when continuity of energy and food supply chains can no longer be guaranteed? Wright will present evidence that many military organisations are already working on responses to climate change from a state security rather than a human security perspective. What does this entail?

Essentially, two interrelated processes kick in: one informatics based; the other focussed on technologies for systematic physical exclusion of unauthorized citizens, based on a wide variety of emergent coercive capacities. States already have tough systems at borders to prevent anyone without documentation passing and these are becoming increasingly sophisticated with various biometric recognition, surveillance and tracking capabilities. Face recognition and vehicle tracking systems originally designed in response to the “war against terror,” can be rapidly re-orientated towards climate change refugees. Such people will not be officially designated as such, since the general derogatory label of illegal immigrants will facilitate a legal exclusion response because climate change refugees have no legal status. We are already witnessing a security paradigm shift amongst key military powers to reframe climate change, as a major security threat. Similarly, the military, police, media entertainment, university security complex is already refining its capability set towards new measures, to ensure border security and zone exclusion. This new capability sets already include non-human algorithms and robotic elements for patrolling long borders and a wide variety of sub-lethal weaponry has emerged which can either be fired at crowds by humans or operated by machine intelligence. But how probable are such deployments?

I will explore the current reconfiguration of the major manufactures of intelligent fencing systems; unmanned ariel vehicles, robotic security and patrolling systems as well as lethal and sub-lethal weapons technologies and doctrines to meet the demands of these new markets. The presentation ends with a discussion of some ethical dilemmas of how to respond to such technical fixing. Should we acquiesce (which may be tantamount to collusion), or should we engage in research activism to reveal social and political consequences of existing fence systems like those recently erected in Bangladesh.. Such uneasy ethics will be at the core of any future intelligent policy response to climate-induced mass migration. Do we build resilience into modern architectures and infrastructure or a fortress: a human or an inhumane menu of future solutions?