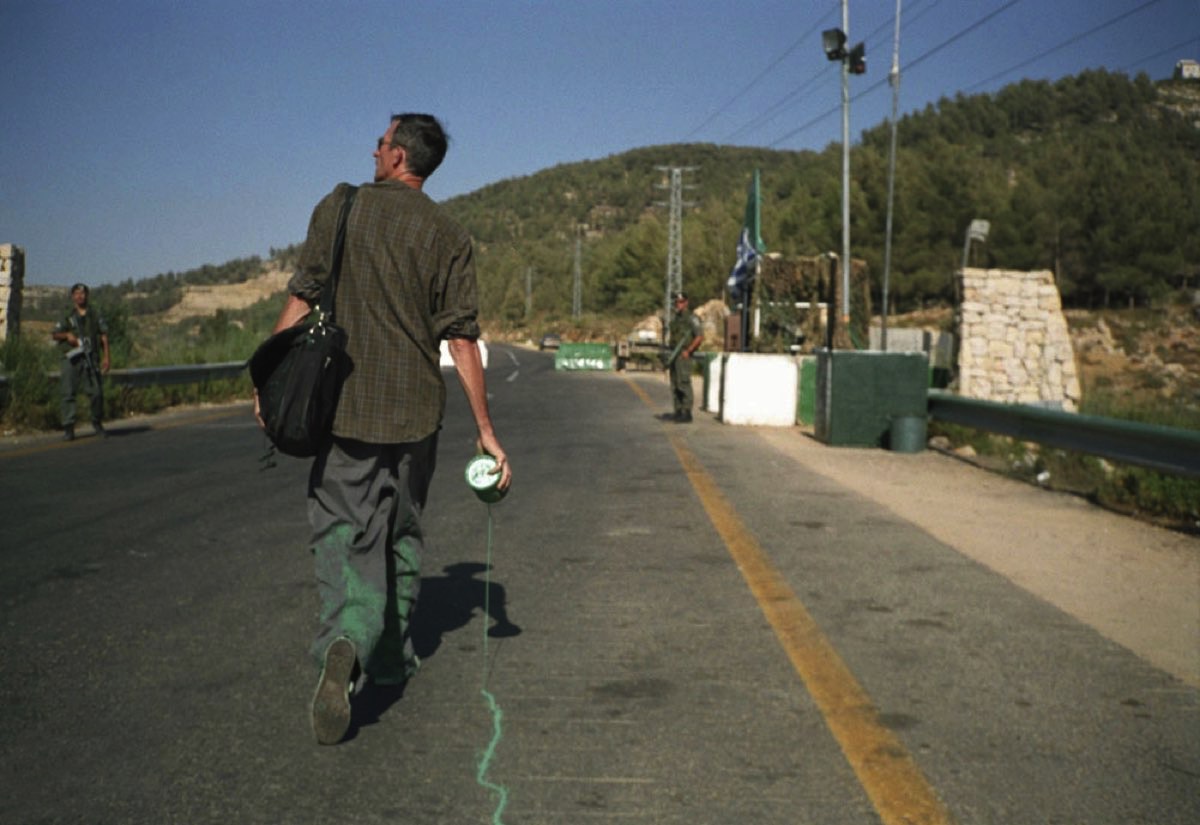 In 1995, Alÿs realised an action in São Paolo called The Leak in which he walked from a gallery, around the city, and back into the gallery trailing a dribbled line from an open can of blue paint. This action was reprised in 2004 when he chose to make a work in Jerusalem. Using green paint, Alÿs walked along the armistice border, known as ‘the green line’, pencilled on a map by Moshe Dayan at the end of the war between Israel and Jordan in 1948. This remained the border until the Six Day War in 1967 after which Israel occupied Palestinian-inhabited territories east of the line.

Though palpably absurd, and greeted by onlookers with some bewilderment, Alÿs’s action of dribbling green paint behind him raised the memory of the green line at a time when the separation fence, seen in his paintings here, was under construction to the east of the green line. He later encouraged various commentators from Israel, Palestine, and other countries to reflect on his action, and their voices, sometimes sceptical, sometimes approving, can be heard while the video of his action is screened. Most importantly Alÿs wanted to ask what the role of poetic acts could be in highly charged political situations, while acknowledging that the relation of poetics to politics is always contingent.

Francis Alÿs (born 1959, Antwerp) is a Belgian artist. His work emerges in the interdisciplinary space of art, architecture, and social practice. After leaving behind his formal training as an architect and relocated to Mexico City, he has created a diverse body of artwork that explores urbanity, spatial justice, and land-based poetics. Employing a broad range of media from painting to performance, his works examine the tension between politics and poetics, individual action and impotence. Alÿs commonly enacts paseos—walks that resist the subjection of common space. Alys reconfigures time to the speed of a stroll, making reference to the figure of the flâneur, originating from the work of Charles Baudelaire and developed by Walter Benjamin. Cyclical repetition and return also inform the character of Alÿs’ movements and mythology—Alÿs contrasts geological and technological time through land-based and social practice that examine individual memory and collective mythology. Alÿs frequently engages rumor as a central theme in his practice, disseminating ephemeral, practice-based works through word-of-mouth and storytelling.