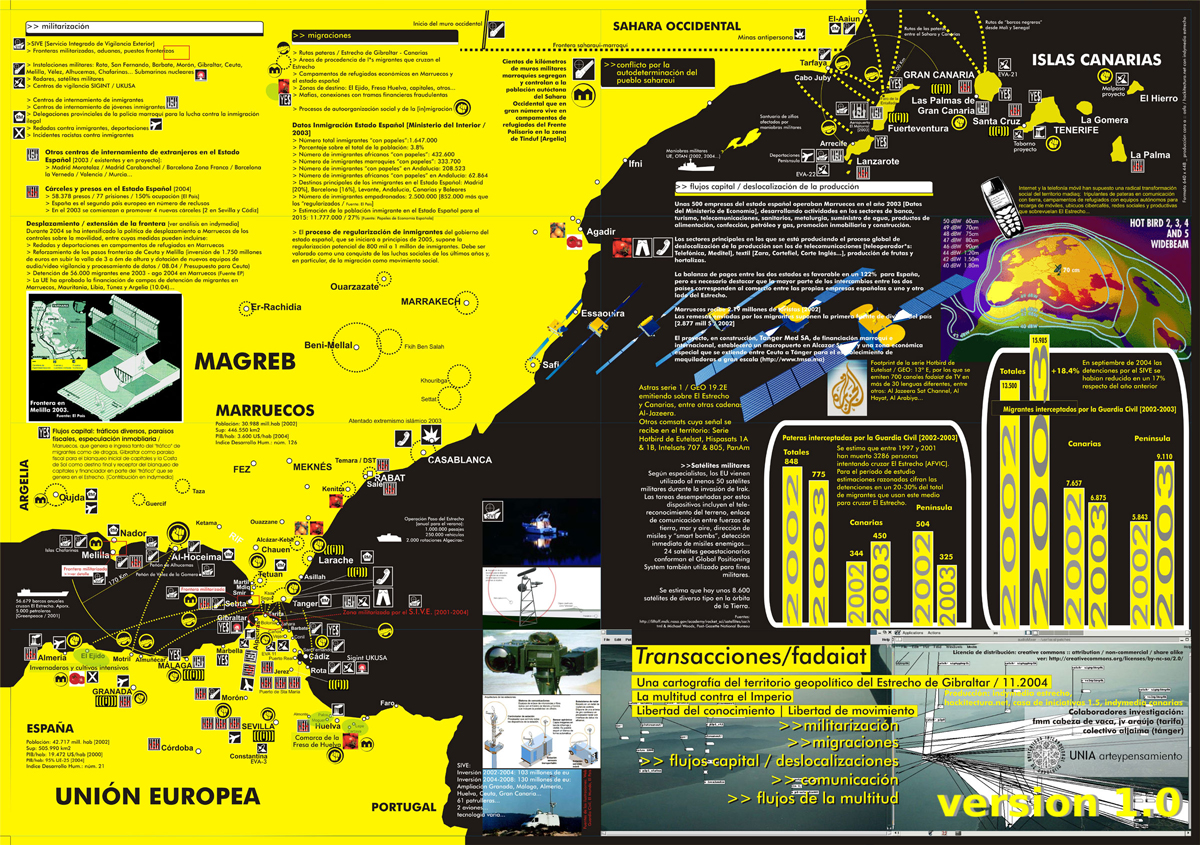 Hackitectura’s map Cartografía del Estrecho (Cartography of the Straits of Gibraltar) creates an alternative understanding of the Spanish-Moroccan border region. The border is not an abstract geopolitical line but an increasingly complicated, contested space. The inversely oriented (north at the bottom) map highlights connections between southern Spain and northern Morocco to show a single region. A multitude of migrants enters Europe in flows, past motion sensors, semi-military repression and expulsion. The idea of the map is to follow the flows that already traverse the border, such as migrants, Internet data and cell phone calls, as well as capital and police. The flows reshape the very border into a border region. In this mapping project, Hackitectura and their collaborators map the border region to contest and transcend it.

Hackitectura is a group of architects, artists, computer specialists and activists founded by José Pérez de Lama, Sergio Moreno and Pablo de Soto in 1999. Their practice uses new technologies to create temporary spaces that can escape the formal structures of control and surveillance which are regulated by technological and political means in contemporary society. Inspired by hacker culture, they use free software and communication technologies to subvert established power structures through bottom-up organisation and by creating alternative connections between disparate spaces. The group often works collaboratively, carrying out research into the effects of communication and technology on physical spaces, the formation of social networks and how these can be put to work for an activist agenda.

They have collaborated with Indymedia Estrecho on mapping and creating links across the Straits of Gibraltar or Madiaq, the highly militarised zone that is the shortest distance between Africa and Europe. As part of a series of projects they established a network link that became a free public interface between the two continents creating an ‘alternative cross-border communication space’, a counter-strategy to the increasing surveillance and security regimes of the border. The project also included a series of regular events that took place on either side of the straits. Called Fada’iat or ‘through spaces’ the events included workshops, actions, and seminars bringing together migration, labour rights, gender and communication activists, political theorists, hackers, union organisers, architects and artists in a temporary media-lab that could become a permanent public interface between Tarifa and Tangiers. Combined with direct actions against the detention of migrants, for a time the event created a network of communication, action and solidarity between the two continents.