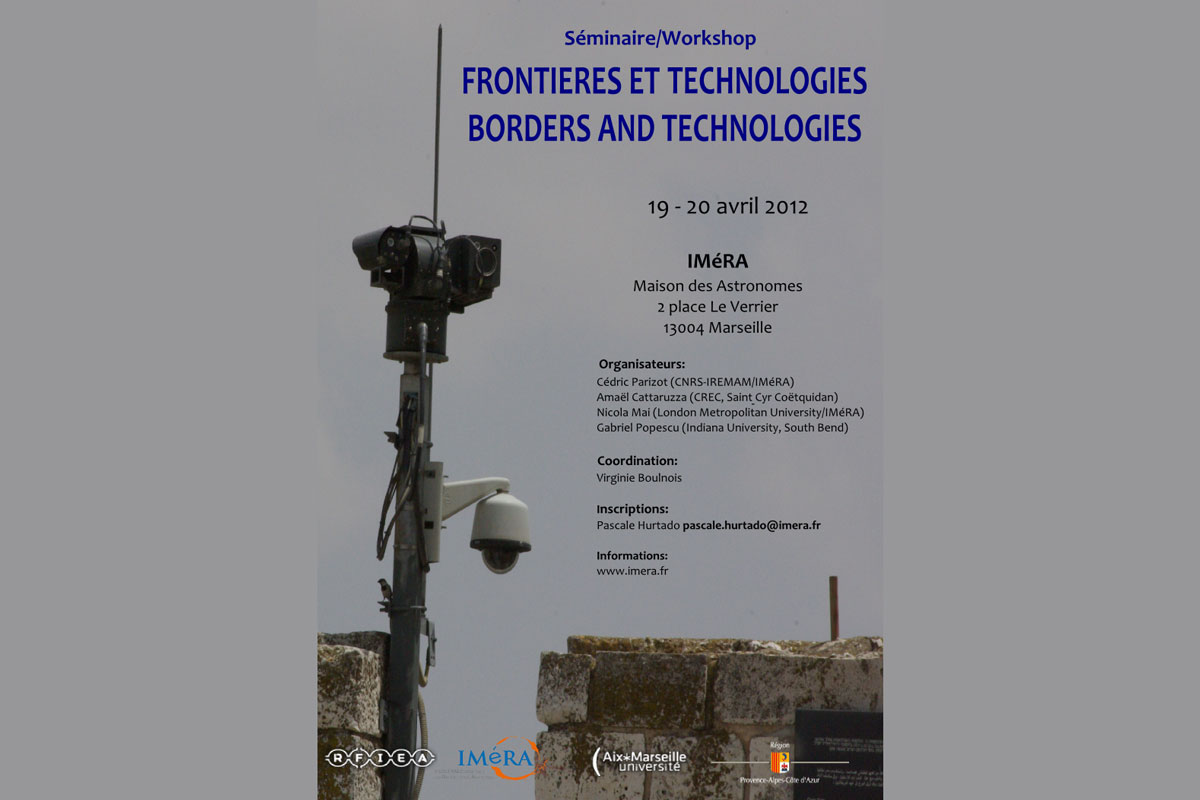 The use of technology to control flows of people and goods across borders is quickly becoming an ubiquitous practice. The “smart borders” initiative and “virtual fence” project in the United States, the Schengen border’s centralized intelligence system, robot patrols and high-tech fences between Israel and the Occupied Palestinian Territories, sentinel killer robots in South Korea and, of course, the worldwide adoption of the electronic passport standard are just a few iconic examples of broader dynamics and trends. The development of these bordering technologies is linked to the widely spread assumption that they provide efficient tools to identify and stop undesirable and ‘suspect’ individuals and groups within global flows. The deployment of technological bordering devices raises a series of crucial questions for it participates into the broad transformations of the nature, the shapes of borders, spaces and territoriality.

“Smart borders”: state of the art

Noel Sharkey (Artificial Intelligence and Robotics, Professor, University of Sheffield)
Bordering on the ridiculous: controlling our movements from the sky

When things bite back

In October 2006 the American Congress voted the Secure Fence Act and planned the construction of a 1 100 km fence at the Mexican/United States border. This project aimed to prevent illegal immigration, drug smuggling and terrorism. It included the deployment of a « systematic surveillance of the international land and maritime borders of the United States through more effective use of personnel and technology, such as unmanned aerial vehicles, ground-based sensors, satellites, radar coverage, and cameras » (Secure Fence Act, Section 2). The use of surveillance technology seems to be one of the key elements of security making, because it apparently allows a systematic and global surveillance of the border area. Such technologies would face the uncertainty and the unpredictability of illegal influx. Few years before, the American concept of smart borders had introduced technologies in order to identify merchandises (chips and microchips) and individuals (biometric controls, electronic cards, etc.). Nowadays, the American example is not exceptional and the use of technologies in the field of border control is more and more current in the world (as for the Schengen borders in Europe). This lecture will attempt to stress the state of the art of the use of technology for border control and to consider the meaning and the consequences of this use on the configuration of borders? Does technology lead to the « ubiquituous border », as described by the geographer Stephen Graham?

In a globalised world where interconnectedness and integration are key dynamics influencing economic growth and social development, policymakers are increasingly realizing the need for accelerated border management regulatory reform to reduce unnecessary barriers and burdens on trade. However, the fruits of globalization are used not only by legal businesses, but also by illegal traders. Therefore, border agencies face a serious challenge of balancing security and trade facilitation. The World Customs Organization (WCO) has developed a set of instruments in order to assist Customs Administrations in promoting the balance between the two, and technology plays a pivotal role striving for this objective. Deployment of technology, however, has never been and will never be a “silver bullet” to solve all public policy objectives.  This presentation will start with discussing the changing environment in which border agencies operate, with a focus on the notion of ‘border’ and its changing meaning over time. After the overview of WCO instruments we will look into different kinds of technologies that are currently in use, as well as those that are now being developed. We will also discuss issues pertaining to the operationalisation of technologies, as they become vital for any agency that considers using them. Finally, we will discuss critical aspects of technology development which would allow it to remain an indispensable tool in the hands of Customs.

For nearly 20 years, the fight against “terrorism” and other transnational phenomena have raised “border security” as a crucial issue among the so-called defense and security issues. Everywhere around the world, the “Smart Borders” programs develop. Yet, far from “enforcing” the borders, the “technologization” of borders is one of the major factor of the confusing of the image of the geopolitical world. It reminds us that border control does not target borders as much as the flows that might cross them. These controls – commonly said to happen at the “border” – are actually made in very specific points (checkpoints) that do very rarely match those which compose the lines by mean of which we came to represent the border on the maps of the geopolitical world. Moreover, they are made before one becomes mobile by mean of a “deterritorialized regime” of control of flows which we propose to further explore in this presentation based on the case of the United States, and also partly on the case of Europe. The aim is to emphasize the networking logic that animates security apparatuses, the ways in which this logic impact on contemporary practices of borderization and the emergence of traceability as the major technique of contemporary governmentality.

TALOS (Transportable and Autonomous Land bOrder Surveillance system – www.talos-border.eu) is a European research project co-funded by the EU 7th Framework Programme under the Security thematic area. The main objective of TALOS is to develop and test innovative mobile and autonomous systems aimed at protecting EU land borders. Unmanned Ground Vehicles (UGVs) are major components of the TALOS project. TALOS addresses the surveillance of large land border areas, which was recognized by the European Commission as a strategic ability for its border security mission. Its aim is to help the detecting, tracking and apprehending of people attempting to cross the border outside of surveilled and authorized routes. To meet the challenges posed by the diversified nature of the European Union’s external border, the system needs to be adaptable, transportable and cost-efficient.

Noel Sharkey (Professor of Artificial Intelligence and Robotics, University of Sheffield)
Bordering on the ridiculous: controlling our movements from the sky

Plans to automate killing by robot have been a prominent feature of most US forces’ roadmaps since 2004. The idea is to have a staged move from man-in-the-loop to man-on-the-loop to full autonomy. While this may create considerable military advantages it raises ethical concerns with regard to potential breaches of International Humanitarian Law. Moreover, we are already seeing these new technologies being deployed at borders in countries such as US, Latin, America, South Korea and Israel. Drone technology alone has proliferated to more than 51 countries and police forces are beginning to use it routinely. The talk will discuss the development of the technology into the near future as it becomes more autonomous and explore the ethical dimensions.

Based on lessons learnedfrom an expertise mission with the Royal Thai Army and technical studies carried out for French security industries, the speaker will focus on two specific areasof South-East Asia: the Thailand-Burma border and Malaysia’s southern border (Borneo Island).

From a few examples of technologies introduced in the Customs administrations in sub-Saharan Africa and an ethnography conducted in an African Customs reforming for more than four years, the communication will develop three main ideas. First, because they are new “lands of reform” and strongly influenced by the outside, customs administrations in Africa use technologies equally and sometimes more extensively than Customs administrations of “developed” countries. Second, these technologies are “tamed”: they upset the established order and are at stake to establish new orders and relations of authority and power within the administration and beyond, for example, professions-partners (brokers, freight-forwarders, banks). Third, the technologies are vectors to transform political relations between states, under pressure from donors who support the policies of regionalization,  economic integration, and liberalization, without always having the desired effects.

Mobility imperatives under globalization are profoundly altering borders’ relationship to space. Risk management strategies associated with the quest to securitize transnational mobility have triggered a technological race to embed borders into all kinds of flows in order for the border to be able to travel with the flow and be ready to be performed whenever circumstances require. With the help of technologies such as Radio Frequency Identification (RFID) borders are disembedded from their local contexts, projected at distance, and then re-embedded anywhere in the state territory. Such articulation of borders changes the way movement through space is organized and how people and places come into contact. This “portal-like” logic of border geography brings people and places together by connecting them directly across space, unlike modern border territoriality that connects them via contiguous state territories. This situation opens up the entire space of the globe to bordering processes, thus accelerating the proliferation of borders and multiplying the actors involved in their establishment. The implications for society of such novel border spatiality are paramount. It is vital to understand how is democratic participation to be spatially reorganized to assure border governance remains in the public domain.

According to the Algerian sociologist Abdelmalek Sayad, the process of migration is marked by a double absence, as migrants are uprooted from their ‘home’ societies and they fail to ‘integrate’ in their countries of emigration. In this perspective, the migrant experience is characterized by a permanent break with the places that link the individual with his or her native environment as well as by the confrontation with a world that thinks and lives differently. Current understandings of the experience of migration, whether they refer to issues of cultural identity of integration, refer to and focus on a series of breaks and oppositions. These are constructed as inherent to migrants’ fate and are constantly used in theoretical reflections on populations on the move. For instance, migrants are described according to binary oppositions such as: mobile/immobile, neither there nor here, absent/present, central/peripheral, and so forth. This understanding of people’s movements is an historical and sociological simplification and does account for the way the world was transformed by the onset of generalized mobility and by the spread unprecedentedly complex means of communication. Today, the definition of the migrant based on different forms of rupture considered to be fundamental and radical is in trouble. Alternative organizing principles emerge, as mobility and connectivity mark the experiences of contemporary migrants. In this talk, my aim is to analyse the different and interlinked forms of rootedness, displacement and connectedness that are experienced by contemporary migrants. Contemporary sociological studies of migration must focus on issues of connectedness and of presence. These days it is increasingly rare to see migration as a movement between two distinct communities, belonging to separated places that are characterized by independent  systems of social relations. On the contrary, it is more and more common for migrants to maintain distant relations that are similar to relations of proximity and to be able to activate them remotely on adaily basis. This mediated bond — via telephone, email, or Skype- — makes it easier than before to stay close to one’s family, to others,  to what is happening at home or elsewhere. The development of communication practices —from simple ‘conversational’ methods where communication compensates for absence, to ‘connected’ modes where the services maintain a form of continuous presence in spite of the distance — has produced the most important change in migrants’ lives. Migratory practices (in particular the activation of networks, remote organization, and the monitoring of movements), the way  mobility is experienced and implicitly the construction of new  “home  territories” have been thoroughly transformed.

ArtWar(e) is a platform for « artistic risk management » and « computer assisted curating ». One of its main goals is to visualize waves of emergence, obsolescence, import-export of artistic concepts, as well as to detect formats. Contrary to art history, where forms are labeled once they have been formatted, ArtWar(e) seeks to track these trends as soon as they emerge, before they have been named and filed as art. It is quite a kafkaesque project, for it uses the most powerful surveillance tools ever built, such as Facebook, in order to observe the slightest moves of the social life of forms. We shall present the methodology and the principles of the Facebook application we are working on.