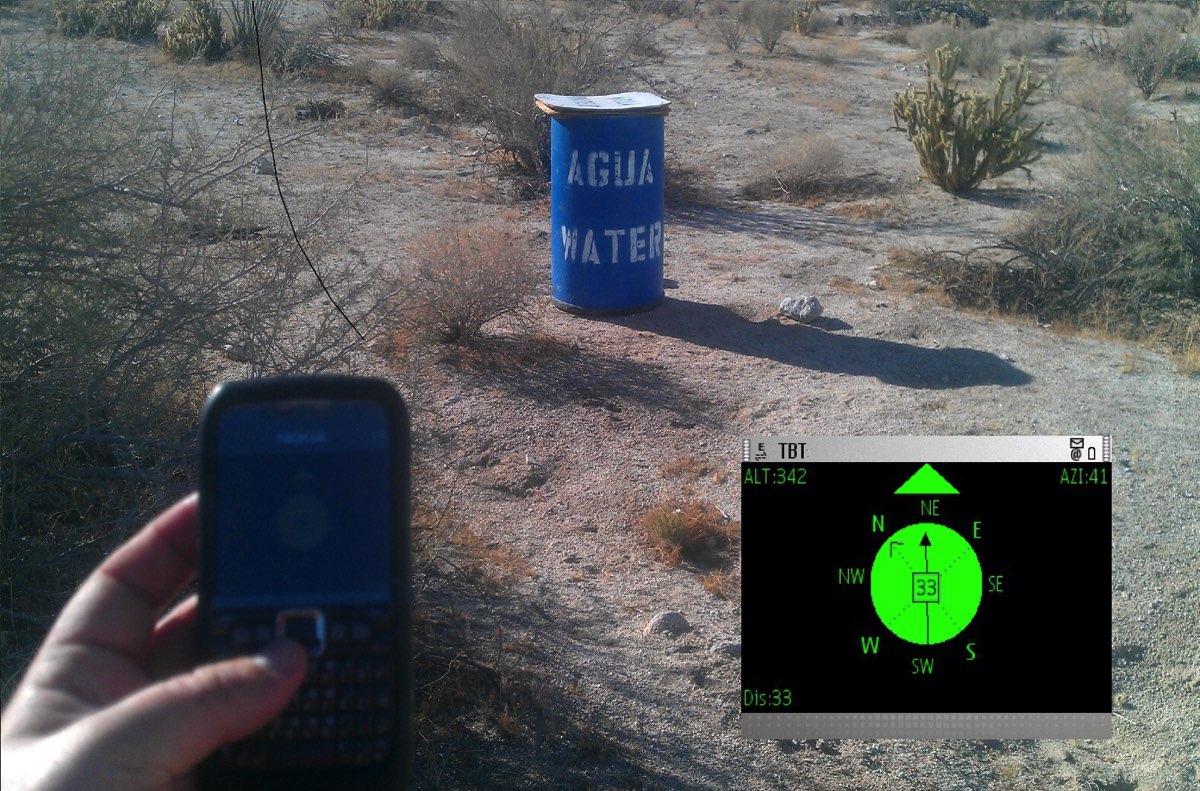 The Transborder Immigrant Tool is a Electronic Disturbance Theater 2.0 (Ricardo Dominguez, Brett Stalbaum, Amy Sara Carroll, Micha Cárdenas, Elle Mehrmand) project designed to repurpose inexpensive used mobile phones that have GPS antennas (through the addition of proper software which the TB project is designing) to provide emergency personal navigation, helping to guide dehydrated immigrants to water safety sites established by activists and to provide poetic audio nourishment as well. The Transborder Immigrant Tool is one of many projects that currently use some aspect of the walkingtools.net reference APIs. Its main thrust is to addresses the public safety issues created by the duplicitous immigration policies of the United States.

See also a conversation with Ricardo Dominguez on hyperallergic.com (FR) about the Transborder Immigrant Tool, shown within the antiAtlas of Borders exhibition at the Musée des Tapisseries in Aix-en-Provence in October 2014.

Micha Cardenas is a transgender performance and new media artist. She works in social practice, wearable electronics and intersectional analysis. She currently lives and works in Los Angeles. Cárdenas has performed and presented her work in many places around the world, including a keynote performance at the 2012 Allied Media Conference, the 2012 Zero1 Biennial in San Jose, 2010 California Biennial, the 2009 Mérida Biennial and the Hemispheric Institute of Performance and Politics 7th Encuentro in Bogotá, Colombia. In 2008, Cardenas performed “Becoming Dragon”, a 365 hour mixed reality performance in Second Life.Recent projects include virus.circus, a collaboration with Elle Mehrmand. She has also curated exhibits in Tijuana, Mexico. As a member of the Electronic Disturbance Theater/b.a.n.g. lab, she helped design the Transborder Immigrant Tool, a GPS device that is designed to help undocumented immigrants crossing the US-Mexico border find water stations during their journey. Cardenas argued that the aim of this project was “about giving water to somebody who’s dying in the desert of dehydration,”but which critics claimed was an irresponsible use of government funds, and a tool that would also help facilitate other illegal activity, like smuggling, as well. Ultimately, all investigations of the project were dropped without finding any misuse of funds or illegal activity on the part of the artists.