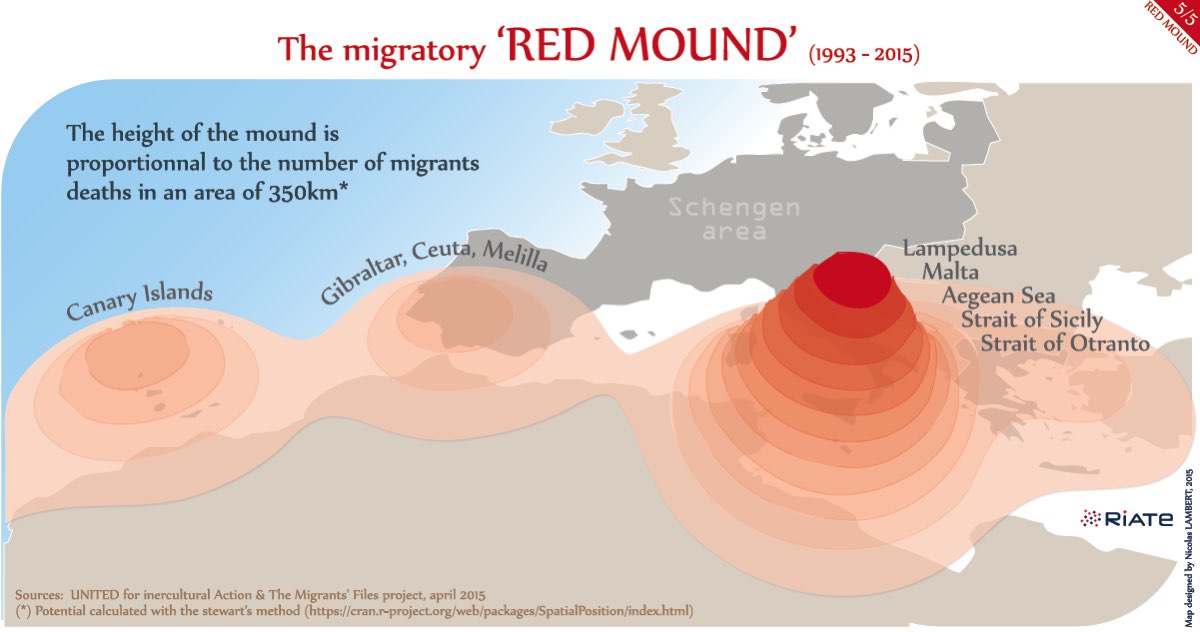 In 25 years, more than 35 000 migrants died trying to reach the European Union. Drowned into the sea near Lampedusa, suffocated in a truck in Austria, starved to death in the Sahara desert or hit by a train in the Channel Tunnel, these tragedies continue day after day. Formerly hidden or ignored, these figures are now regularly in the news. In September 2015, the whole of Europe was seriously upset with the picture of the Kurdish child Kurdi Aylan who died on a Turkish beach.

The maps 1 to 4 tell the story of this geography of deaths and implicate the responsibility of Europe in these dramas. From 1995 to 1999, Southern Spain (Strait of Gibraltar and the Spanish enclaves of Ceuta and Melilla) appears as the preferred point of entry to the European Union. Gradually “secured” (SIVE in 2002, heightening the walls of Ceuta and Melilla in 2005), immigration flows moved to the south in direction to the Canary Islands and to Senegal. To stem these undesired mobilities of humans in direction to Europe, Frontex set up in 2006 control operations far from the borders of the European Union. From 2010, following the “Arab Spring” and much more dramatically with the geopolitical instabilities caused by the wars in Libya and Syria, the huge majority of the dramas are refocusing in the Mediterranean area. Finally, progressively Europe moves or strengthens its border controls, making the trip to Europe becomes more and more dangerous for migrants.

The migratory red mound (map 5) is a global and metaphorical vision of this tragedy. This map draws the European border, not as a line, but as a battlefield. On this map in 3 dimensions, a new territory is taking shape. The height of the mound illustrates the scale of the hecatomb. But, before becoming a map, the “red mound” (“la butte rouge” in French) is over all a song written by Gaston Montéhus (1872-1952). This anti-war song refers to the Bapaume mound which was one of the bloodiest places of the First World War. Revolutionary song also, the red mound is also identified as a reference of the Paris Commune events in 1871. Actually, the migratory red mound is therefore part of a long story of pacifism: the refusal of the First World War once, and the rejection of the invisible war waged against migrants by the European union today.

Methodology: The potential is a spatial interpolation method developed in the 1940s by the physicist John Q. Stewart (1942), by analogy to the gravity model. This method aims to estimate unknown values of non-observed points from known values given by measure points. Cartographically speaking, they are often used to get a continuous surface from a set of discrete points. In thematic mapping, this method allows to simplify and highlight relevant spatial structures. For the maps shown here, the calculations were carried out with the R package SpatialPosition. STEWART J.Q. (1942) “Measure of the impact of a population at a distance”, Sociometry , 5 (1 ) : 63-71 .

Nicolas Lambert is a cartographer, member of the interdisciplinary network for the European spatial planning (CNRS). Involved in the European research program ESPON, his works mainly deal with the graphic representation of spatial information, for which he is developing a critical and radical dimension. He’s also member of the network Migreurop and of the French committee for cartography.