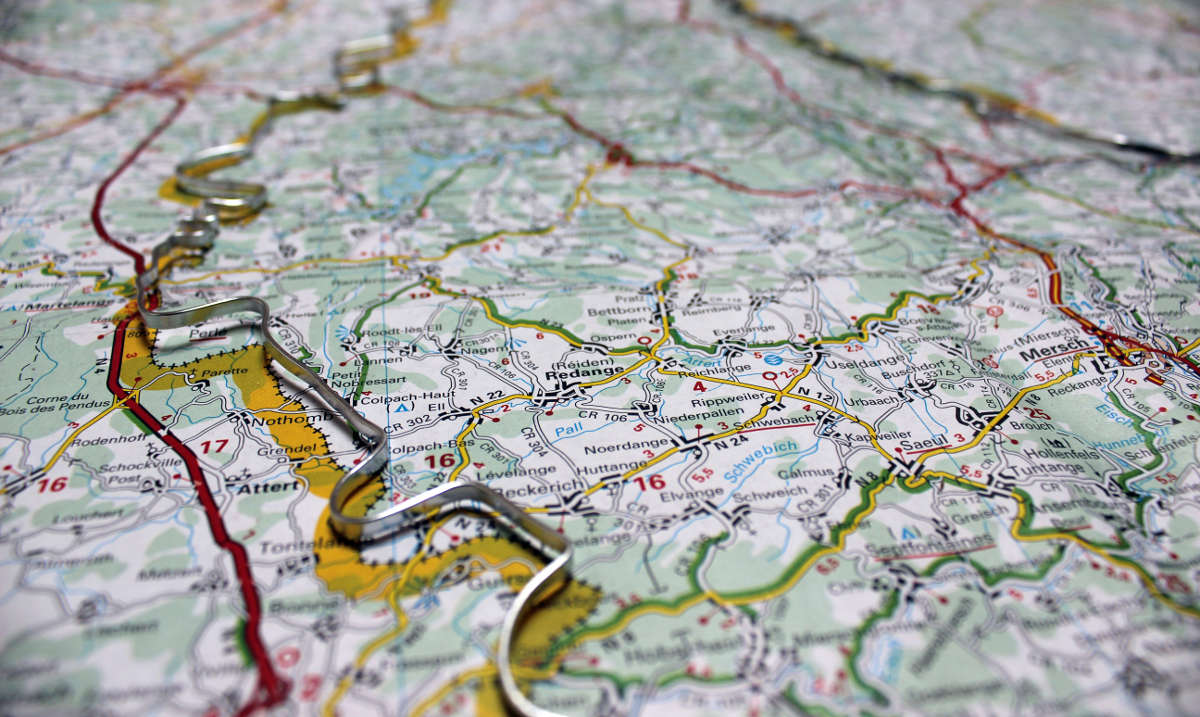 On line: a manifestation of the human border

On June 9th 2018, the artist Clio Van Aerde will start her expedition during which she seeks to explore the physical border of the Grand Duchy of Luxemburg. The departure and arrival point is Schengen and to arrive back to the starting point, it will take around four weeks. The artist will walk as precisely as possible along the border-line. Thanks to the collaboration with MUDAM, the public will be able to observe the development of this endeavour in real time in the museum and on online.cliovanaerde.com
on line follows the Walking Art practice and questions the meaning of the border by exploring its physicality on a human scale. This project seeks to enlighten absurdities as for instance privileges and barriers encountered in relation to the possession of a certain passport or another. In the larger sense, nowadays, while some people lead progressively nomadic lives as if the borders had vanished, others perceive the exact same borders as impassable barriers. The body finds itself physically limited while the use of technology, more essential than ever and inexhaustible, surpasses every physical limits. The naive procedure of on line seeks to question what society is taking for granted.
On June 6th at MUDAM, right before the performance and on July 11th (location t.b.c.), after the performance Clio Van Aerde and two members of the Institute of Geography and Spatial Planning of the University of Luxembourg, Estelle Evrard and Cyril Blondel will hold a public debate about on line.

Born in Luxembourg, Clio Van Aerde is an artist and a scenographer, living in Luxembourg and Vienna. She studied in Madrid, Paris and Vienna before graduating in scenography at the Akademie der Bildenden Künste Wien. Her artistic practice questions the trivial relations between body, time and space through performances that explore repetition and endurance. Next to her own practice, Van Aerde also works as a stage and set designer and engages in the organisation and development of the research based residency Antropical as part of Kolla Festival.

Cyril Blondel is post-doc researcher in geography and spatial planning at the University of Luxemburg (Research Unit IPSE). He holds a PhD in planning from the University of Tours, France, since 2016. He was in 2015-2016 Marie Skłodowska-Curie fellow at the University of Tartu, Estonia, as part of the FP7 European project RegPol2. He has also been guest researcher in Graz and Leipzig. He is now involved in the H2020 European project RELOCAL that aims at “resituating the local in European Cohesion”. His research interests are mainly connected to the production of spatial justice and territorial development public policy in Europe, in particular in and towards peripheral and border spaces. He is also interested in interactions between art and research. He has conducted his fieldwork mainly in Portugal, Serbia, Croatia, Estonia and France. He is in the first semester of 2018 sharing a residence one week a month with the theatre writer Magali Mougel in the mining basin of Pas-de-Calais in France.

Estelle Evrard is a senior researcher in political geography at the University of Luxembourg. She holds a Master Degree in European Law (2006) from the Institute of European Studies (Brussels) and a PhD in Geography (2013) from the University of Luxembourg. Her interest for the European construction is the common thread through her professional career. Her research deals with the significance of the European integration for localities in terms of governance, autonomy and territoriality. In this endeavour, she understands border areas as exemplary terrain for investigation. She is also interested in the research/practice/policy interface (e.g. ESPON, INTERREG) as well as in the interaction between art and research. She is currently involved in the H2020 European project RELOCAL that aims at “resituating the local in European Cohesion” (2016-2020) and in the INTERREG VA Greater Region “UniGR-Center for Border Studies” project (2018-2020).